The 11 Best Filming Locations to Visit in the UK

Britain is famous for its picturesque villages, rugged countryside, and grand stately homes.

And while they’re fantastic day trips for tourists within the UK, these landmarks are what makes the UK a dream destination for filmmakers..

Whether you’re crazy about Game of Thrones or starry-eyed over Bridgerton, our guide to the best film locations to visit in the UK will help you to plan a movie-inspired staycation this summer

1. Harry Potter in Scotland and Northumberland

Filmed between 2001 and 2011, the Harry Potter films took the world by storm and put a lot of British locations on the map.

Today, fans still comb the country to discover the spots where their favourite trio took on the dark arts. Although many of the scenes were shot on bespoke intricate sets (on view at the Harry Potter Studios Tour, Watford), places such as Kings Cross St Pancras Station, Durham Cathedral and Alnwick Castle have been a mainstay on the Harry Potter trail for close to two decades.

For those who want to head further north for a taste of the magic, the Glenfinnan Viaduct in Scotland is home to the Jacobite Steam Train — or, as some like to call it, The Hogwarts Express. This train is best known for its appearance in Harry Potter and the Chamber of Secrets when Ron and Harry fly over the viaduct in a magic-modified blue Ford Anglia.

Die-hard fans will also enjoy a trip to Malham Cove in Yorkshire, seen in The Deathly Hallows Part 1 as a place for Harry and Hermione to camp in their invisible tent.

2. Game of Thrones in Northern Ireland 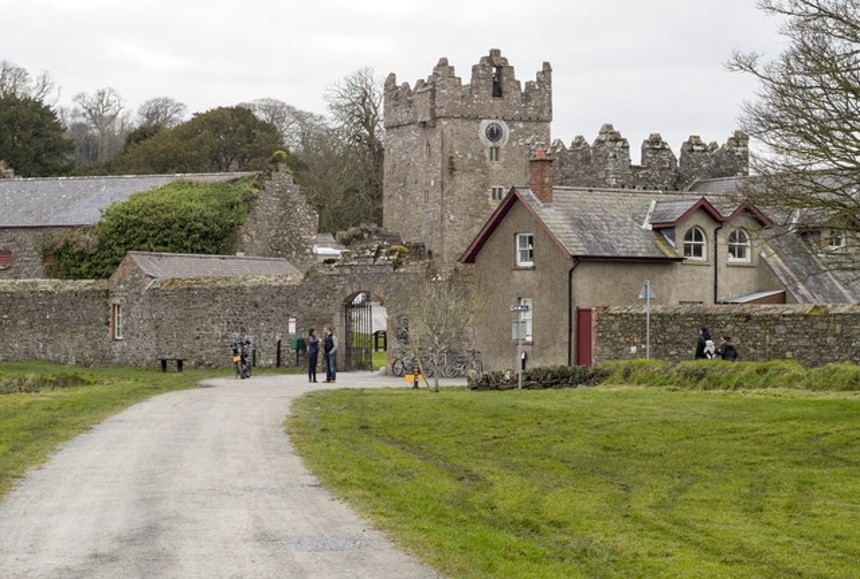 Game of Thrones was one of the most talked-about and highly rated TV shows when it aired between 2011 and 2019. Its Northern Ireland film locations are some of the most recognisable, not least because of the dramatic or tense scenes that were filmed there.

Perhaps one of the most well-publicised locations is the National Trust property of Castle Ward. Scenes at Winterfell were filmed in the castle’s farmyard, making it the backdrop for much of the first series. Scenes filmed here include Bran’s fall, Robb’s archery, the Ser Roderick beheading and King Robert’s arrival. There were also many other scenes filmed on the Castle Ward estate near Audley’s Castle and Quay, and on the paddocks near the standing stone.

Other recognisable Northern Ireland locations include Tollymore Forest and The Dark Hedges. 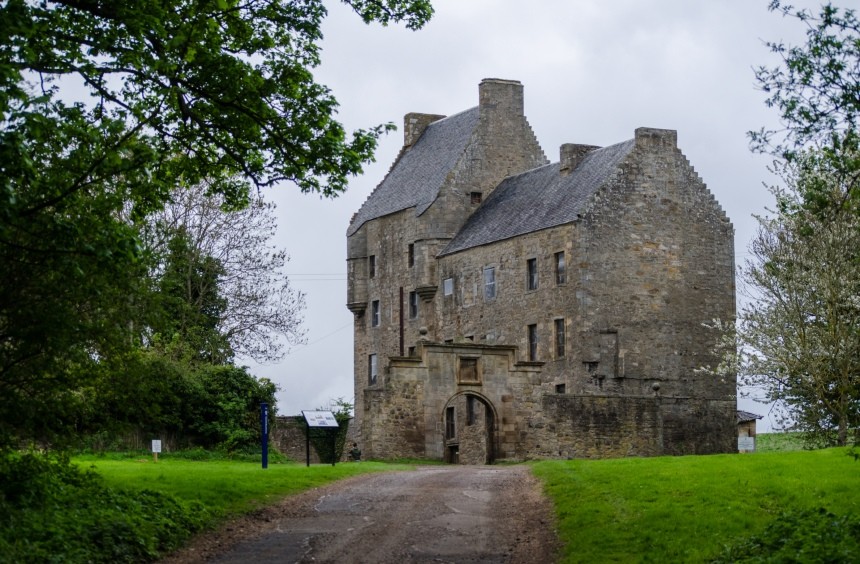 Although the storyline of Outlander takes us across multiple continents and multiple periods in history, all of it was filmed, perhaps surprisingly, in Scotland.

Early scenes with Claire and Frank were filmed in Falkland, Fife, which doubled as Inverness. The Highland Folk Museum in Newtonmore makes a fantastic destination for fans, as well as being used as a location, it also provides a real insight into historical Scotland. And although Fort William still stands, Blackness Castle in Linlithgow was used as its double during filming.

But perhaps the most recognisable location used was Midhope Castle, used to film the exterior scenes of Lallybroch and Broch Tuarach — Jamie’s family home. This beautiful listed building has five storeys and a garret, and, due to its location on a working farm, is only available to view by appointment. Luckily, nearby Hopetoun House (also used for many Outlander scenes) is available for viewing. 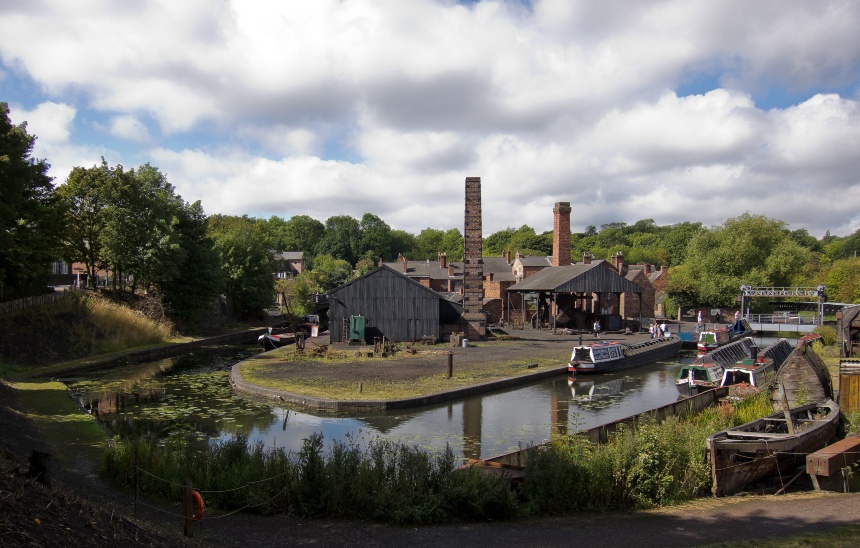 Though Peaky Blinders is set almost entirely in Birmingham, filming for the TV show took place all over the north of England.

Due to bomb damage from the Second World War, many of the locations that were needed to accurately depict early 20th century Birmingham no longer exist. For this reason, producers chose Leeds and Liverpool and their surrounding areas to film some of the show’s most memorable scenes.

The Black Country Living Museum was home to Charlie Strong’s metal yard, and the Shelby’s family home on Watery Lane was filmed on Powis Street, on the then-derelict Toxteth Welsh Streets in Liverpool.

5. The Crown in London, Manchester and Scotland 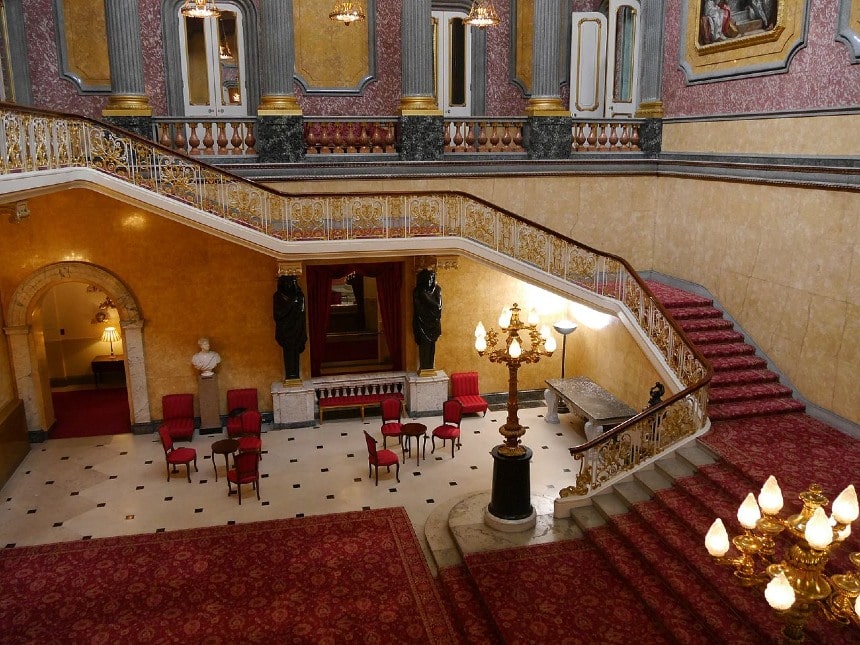 The Crown has been one of Netflix’s most popular TV shows. It’s reportedly one of the most expensive series ever made, with production on the first season costing $130 million. Telling the story of the British monarchy under Queen Elizabeth II’s reign, it’s very much a British show — although locations span the whole world.

Contrary to popular opinion, Buckingham Palace was not used as a location for The Crown. Instead, producers recreated the lavish home by using the Old Naval College in Greenwich for exterior shots, and using Lancaster House and Goldsmith’s Hall in London for the interior scenes. Other parts of the show are filmed at the Ardverikie Estate in Scotland to mimic Balmoral, or in Manchester’s Northern Quarter to recreate New York City for Princess Diana’s trip there.

6. Downton Abbey in Hampshire and the Cotswolds 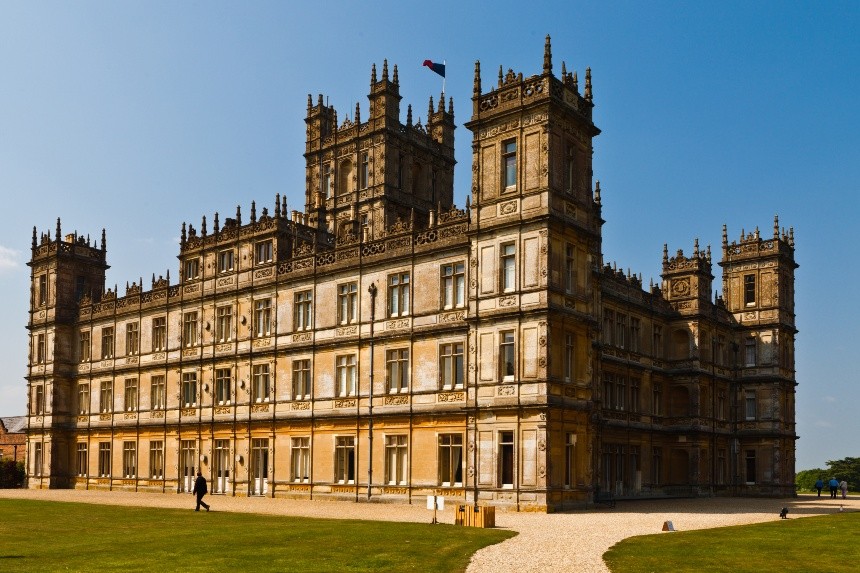 Perhaps one of the most famous period TV shows of all time, Downton Abbey is a story about the well-to-do Crawley family and their servants, set in the early 20th century. The stunningly beautiful Highclere Castle in Hampshire was the main location for the shoots.

Unusually, both the interior and exterior of the building and the gardens were all used by the crew. Visitors to the castle will delight in the Capability Brown-designed gardens and the tearoom.

But what about the scenes in Downton village? Bampton in the Cotswolds, and Alnwick in Northumberland, were both used for filming here, with local people used as extras in both locations.

7. Bridgerton in Bath, London and York 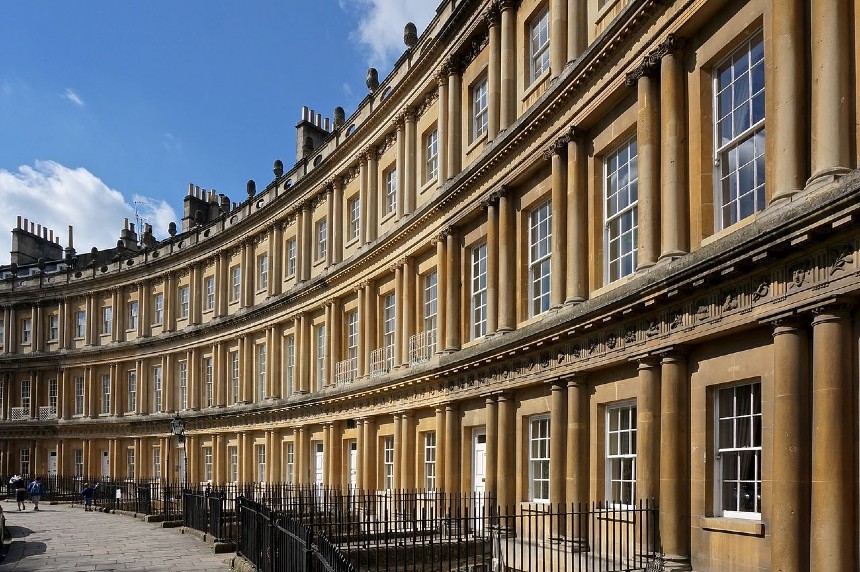 The stunningly stylised Bridgerton was a huge hit on Netflix at the beginning of 2021, and with a new series confirmed, many fans of the small screen will be wondering how they can visit the locations.

Producers of the TV show chose authentic locations for filming in both London and Bath. The classical facade of the Holburne Museum in Bath provided a fantastic backdrop for the exterior scenes at Lady Danbury’s Estate. The Featherington Household makes use of a familiar filming location — at Bath’s elegant Royal Crescent.

However, visitors will have to travel further north to view Simon & Daphne’s marital home. Castle Howard, near York, was deemed the perfect location, and has also been home to other period dramas — Brideshead Revisited and Victoria to name a few.

8. It’s A Sin in Manchester, Liverpool and Wales 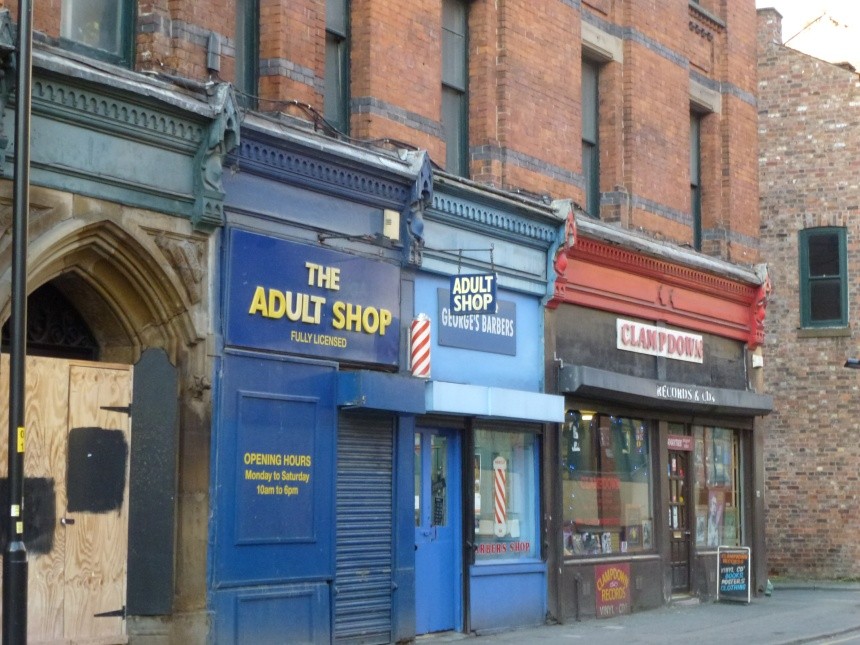 Based on writer Russell T Davies’ life in early adulthood, It’s A Sin focused on a group of friends in London against the backdrop of the 1980s AIDS crisis.

Although mainly set in London, it was largely filmed in Manchester, with other locations used in Liverpool, Bolton, Eccles, Bangor and Rhos-on-Sea. Paton Street, near Manchester’s gay village, was home to the ‘Pink Palace’ the friends’ home. When Colin travels to New York City, he actually walks the pavement of Water Street in Liverpool. Le Mans Crescent in Bolton was transformed to look like a London street.

Later in the series, when the group travel to the Isle of Man to support their friend in his last days, they actually walk the pier and promenade at Rhos-on-Sea — all culminating in that heartbreaking and revelatory final scene with Keeley Hawes and Lydia West.

9. Line of Duty in Birmingham and Belfast 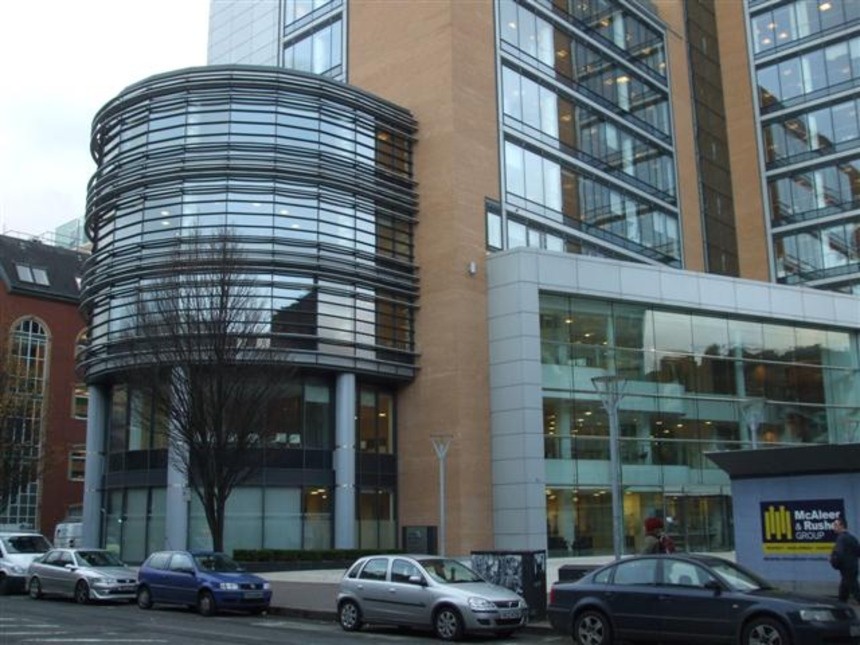 First released in 2012, Line of Duty depicts the trials and tribulations of AC-12, an anti-corruption unit in an unnamed UK police force.

Although the first season was filmed in Birmingham, subsequent series have been filmed in Belfast. The office of AC-12 is filmed in the Invest Northern Ireland offices on Bedford Street in central Belfast. This location is famous for its glass atrium and staircase from the top of which, Hastings, Arnott, and Fleming watch their suspects before questioning begins.

Although the area of Moss Heath is fictional, the scenes here are filmed in the Tates Avenue area — and the street is even mentioned in Series Five. 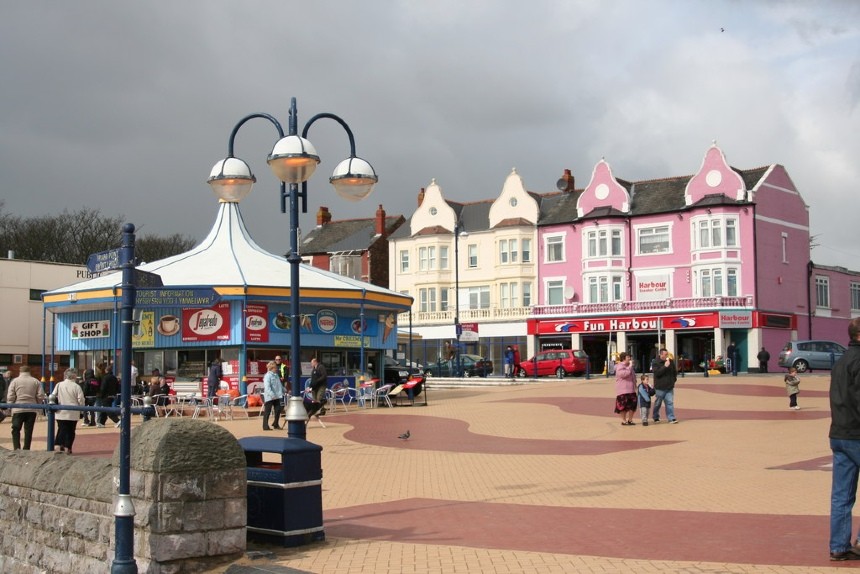 This much-loved show is set between Barry, in Wales, and Billericay in Essex, although all of the show is filmed in Wales. Gavin and Stacey get together after a long-distance relationship although their loveable friends and family can’t help but meddle.

Since filming, Barry Island has boomed with Gavin & Stacey tourists, as some of its most recognisable filming locations are available to visit. Those wanting to pay homage to the moment they said ‘I love you’ should head to the seafront.

Why not get a drink from the real-life Marco’s Cafe, or play for pennies in Nessa’s Slots? Afterwards, head to Trinity Street to see where Gwen and Uncle Bryn live.

11. Derry Girls in Derry/Londonderry and Belfast 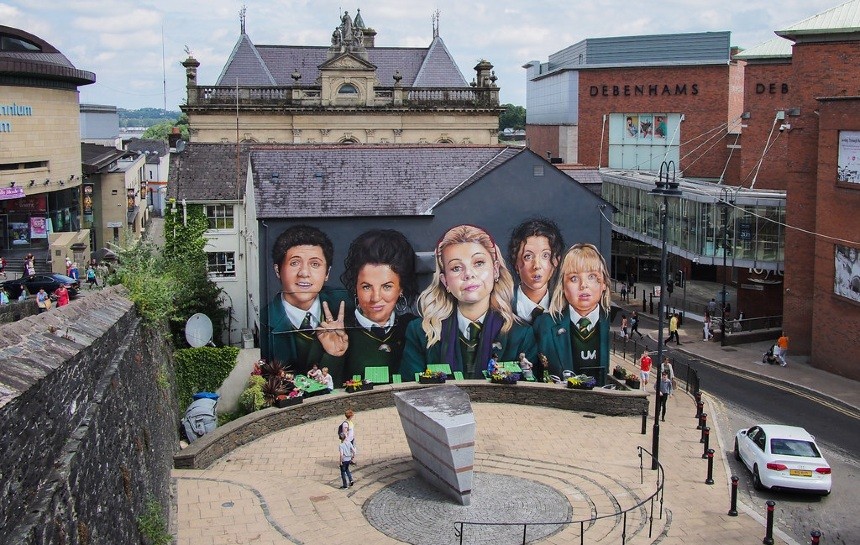 Derry Girls has won fans all over the world thanks to its hilarious characters and Northern Irish charm. The series follows four teenage girls, Erin, Michelle, Clare, Orla and Michelle’s English cousin, James.

Lovers of the series will be pleased to know that there’s now a mural featuring their favourite characters. Head to Orchard Street in Derry centre to have the perfect photo opportunity.

Whilst many of the locations are in Derry itself — you may recognise shots of the city by the river or around the town — some scenes were shot in Belfast too. The scenes at the fictional girls’ school of Our Lady Immaculate College are filmed at Hunterhouse College in Belfast, whilst Finnoula’s Fish and Chip Shop (home of the infamous jobs board) is filmed in a real-life chippy there.

Whether you’ll traverse the Highlands following in the footsteps of Claire and Jamie from Outlander, or prefer a jaunt to the seaside resort of Barry, there’s plenty of exciting and interesting filming locations to visit in the UK. Why not make them a stop on your UK staycation this summer?